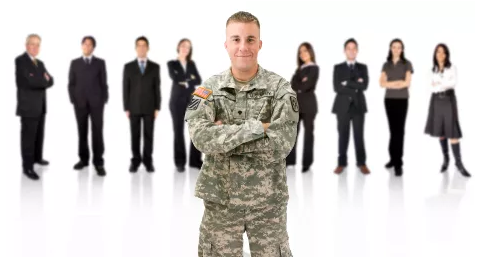 In this post, we will explore the Top 3 Reasons to Prioritize Veteran Hiring in 2021 along with the business case analysis of why America’s top companies want to hire military veterans.

An estimated 200,000 active-duty service members transition out of the military each year, which means this exceptional talent pool keeps adding to the estimated 18 million veterans in the U.S.

America’s best companies are learning that military veterans bring critical on-the-job skills and leadership capabilities to the workforce that can increase revenue, reduce costs, and improve the culture of small, midsize, and large businesses alike.

“I invest in veterans not to do them a favor; they are actually doing me a favor, because the qualities they bring to the workforce are invaluable.” - Roger Staubach, Former Executive Chairman of JLL Americas, Pro Football Hall of Fame Quarterback and Veteran

Veterans are a strong talent pool to build mid-level leadership capabilities at your company, which will help create a more diverse workforce and stronger company culture.

Veterans understand the importance of integrity first, doing things right, and doing the right things, which can help your company boost alignment with compliance management and security programs.

The Business Case for Hiring Vets in 2021

A study of global CEOs revealed that recruiting and retaining top human capital is their #1 overall challenge, and inadequacies in human capital management has prevented achievement of key strategic objectives.

The SHRM Foundation and the National Association of Veteran-Serving Organizations (NAVSO) along with participants from the public and private sectors examined the short- and long-term effects of hiring veterans, drawing conclusions about risks and rewards.

They determined that despite some challenges in the short-term, the long-term positive outcomes far outweighed the negative.

A 2013 study of veteran hiring found that veterans, on average, perform at higher levels and are less likely to turnover, generating positive outcomes for businesses.

The analysis showed that for “A company of 1,000 employees with 25 percent military veteran new hires, cost savings amounted to a whopping $325,000 per year.” - CEB Corporate Leadership Council the Business Case for Hiring Veterans.

For comparison purposes, hiring veterans will increase your company’s performance and decrease turnover.

For example, a company of 1,000 employees and average revenue per employee of $150,000, decreasing turnover by 3% saves $1.3 million annually and increasing performance by 4% improves revenue by $6 million.

Air Force veteran Brian Reese, now CEO of VA Claims Insider, says “veterans are some of the most diverse, learners, action-takers, team-players, and mission-focused leaders in the world.”

“We prioritize hiring vets because they make our company better.” said Reese

In Texas, Renters Warehouse is veteran-owned and regularly hires veterans.

The same is true of VetCor, a small home and business repair firm in Florida, and Tilson, a midsize engineering and IT company in Oregon.

Tilson CEO Josh Broder explains that the military ethic of placing “Service Above Self” is what keeps him determined to hire more veterans.

Why Amazon, Starbucks, and 7-Eleven Continue to Expand Veteran Hiring

Large companies understand the value military veterans bring to their organization, too.

Amazon, Starbucks, and 7-Eleven are three of many big companies who understand the value military veterans bring to their organizations.

“We actively seek leaders who can invent, think big, have a bias for action and deliver results on behalf of our customers. These principles look very familiar to men and women who have served our country in the armed forces, and we find that their experience leading people is invaluable in our fast-paced work environment." - Amazon CEO Jeff Bezos

Starbucks has committed to hiring 5,000 veterans and military spouses each year, CEO Kevin Johnson tells CNBC’s Jim Cramer. Why? Because “They make us a better company,” Johnson said.

7-Eleven CEO and West Point graduate Joe De Pinto says, “hiring and investing in veterans isn't simply the right thing to do, it's the smart thing for business leaders and employers to do.”

In fact, 7-Eleven, Inc. was one of the first companies to join JPMorgan Chase in their 100,000 Jobs Mission, a coalition of companies committed to employing U.S. Military Veterans.

In addition to the skills and talents military veterans can bring to a company, did you know that they can also help your business earn tax credits?

The new CAA, which was signed into law on December 27, 2020 includes several other provisions that extend or modify existing tax incentives.

For example, The Work Opportunity Tax Credit (WOTC) is a credit that is available to employers that hire individuals from certain targeted groups.

Earlier legislative proposals considered an expansion of WOTC, but the final form of the CAA merely extends the effective date without any other substantive changes.

Businesses that hire eligible unemployed veterans can take advantage of the WOTC.

Here's the various veteran-related tax credits your company could qualify for:

Many military veterans will also be eligible for a variety of programs that can contribute to their professional development and their ability to relocate or retrain.

Through the Veterans Benefits Administration, the U.S. Department of Veterans Affairs offers educational benefits, home loans and a variety of technical and employment training programs.

Conclusion: Veterans Have the Skillset Top Companies Are Looking to Hire

JP Morgan Chase leads a coalition of 230 firms involved in the Veteran Jobs Mission, which plans to hire 1 million vets by 2025, having already hit its earlier target of 100,000.

Lessons learned from the initial 100,000 jobs initiative can help CEOs and hiring managers seeking to further increase their return on investment as they develop their own veteran hiring initiatives.

We asked VA Claims Insider CEO Brian Reese, who has personally hired hundreds of military veterans since 2016, what he looks for in a resume of a veteran.

He replied, “I hire for fit and train for skill. Veterans bring heart and hustle to our team and can flat out get the job done at a high-level.”

“Hiring Managers need to realize that a veteran’s resume might not fit a specific role exactly, but guess what, it doesn’t need to. Instead, focus on the veteran’s leadership and management experience, along with their ability to build and lead high-performing teams that win,” said Reese.

Ralph Doran of Stanley Black & Decker takes a similar approach for hiring vets, explaining that their unconventional resumes are exactly what makes them so valuable.

“While veteran resumes may not read like the natural industry progressions we see in other talent, they clearly reflect everything we are looking for.” - Ralph Doran, National Recruiting Manager at Stanley Black & Decker